In the musical theater world, they are known as triple threats. A triple-threat is an actor who can sing and who has studied with a dance studio. They are considered a triple threat by others who audition with them for a role in musical theater because there are three ways in which they could beat 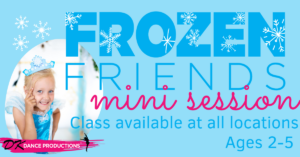 Check out our Frozen Friends Mini Session! Starting soon! 1/23. Available at all locations.