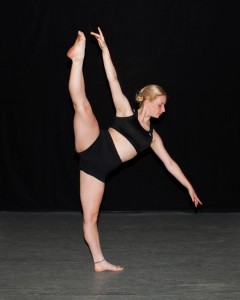 Marquette Catholic High School sophomore, Brooke Lucas, 16, is one of 40 dancers from around the world accepted to the Archcore 40 Dance Intensive this summer in New York City.

“It still hasn’t set in yet,” she said. “I mean I know it’s going to happen, but it hasn’t really sunk in.”

Lucas has been taking dance classes since she was 2 and a half according to her mother, GiGi Lucas. She is currently a student at DK Dance Productions in Florissant, Missouri. She has danced there for nine years under the tutelage of her cousin and godmother, Darci Ward. She currently dances about 15 hours a week.

Brooke Lucas was also accepted to the Joffrey School of Ballet’s summer intensive after Kansas City auditions held on Feb. 14. She will leave for New York City on June 29, after Talent On Parade Nationals. She will be accompanied by Ward on her trip and will stay with a former dance teacher of hers, Sarah Starkweather. Brooke Lucas said that she is excited for a change of scenery.

“I’m too excited to get out of here,” she said. “I feel like it’s the same routine every day. It will be cool to have a faster pace, see new stuff and be somewhere new.”

While New York City may be overwhelming at first, Brooke Lucas has traveled to Tokyo, Japan with Ward for a few weeks, which she believes gives her a bit of big city experience. Brooke would like to thank Ward, her mother, her grandmother, Mary Christen, and her father, Rod Lucas for everything they have done. Rod Lucas helped her work on her audition video and spent hours researching her craft to help her achieve her dreams. Brooke Lucas said that she eventually wants to be a professional dancer in New York.

“It’s a crazy dream,” she said. “When I get older, I want to go to New York and dance. This feels like a dream come true for seven weeks.”

The Lucas family will fly to New York city in August to bring Brooke Lucas back to the Riverbend. While they are there, they intend on doing a bit of sight-seeing and watching a performance the dance school gives to the parents. Brooke Lucas should be back in town by Aug. 14, 2015, just in time to begin her junior year at Marquette.

This article originally appeared on thetelegraph.com. One change was made to the article as posted here to correctly state when Brooke would be leaving for New York City.